Patients missing appointments is a big problem for the NHS. Called ‘DNAs – Did Not Attend’ by the NHS, they’re costly and inefficient.

Where adopted, sending SMS texts to remind patients of their appointment, has reduced the ‘DNA rate’ by as much as 30%. Let’s look at a few examples:

“The service has demonstrated a reduction in the number of patients not turning up for their outpatient appointments from 23% to 6%.” Doncaster and Bassetlaw NHS

“SMS texts sent to patients two days before a booked appointment reduced the DNA rate by an average of one in three.” Central Middlesex Hospital

However, the overall impact on the NHS is nothing like as marked: 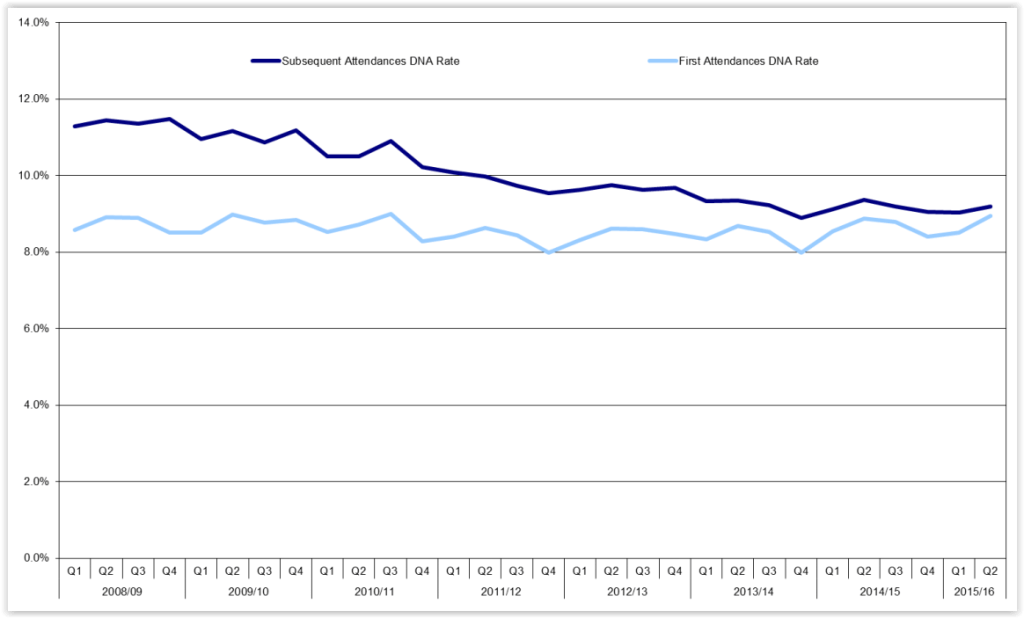 While the rate’s dropping for subsequent appointments, it’s not for first appointments. The narrative provided by the NHS states:

Why is this data so markedly different from the use cases quoted above? Well, not every NHS Trust is utilising SMS to remind patients of their appointments, and it’s reasonable to conclude that they won’t be enjoying the drop in DNAs that Trusts and other NHS organisations who’ve deployed this technology are.

But there’s also evidence that what you write in your SMS has a dramatic impact on whether the patient will turn up for their appointment or not.

The message is critical

A task team from the Department of Health, Imperial College London, and The Behavioural Insights Team experimented with four different messages, sent to over 20,000 patients, to see if there was any change in DNAs as a result.

To cut a long story short, yes, there was, as this table illustrates: 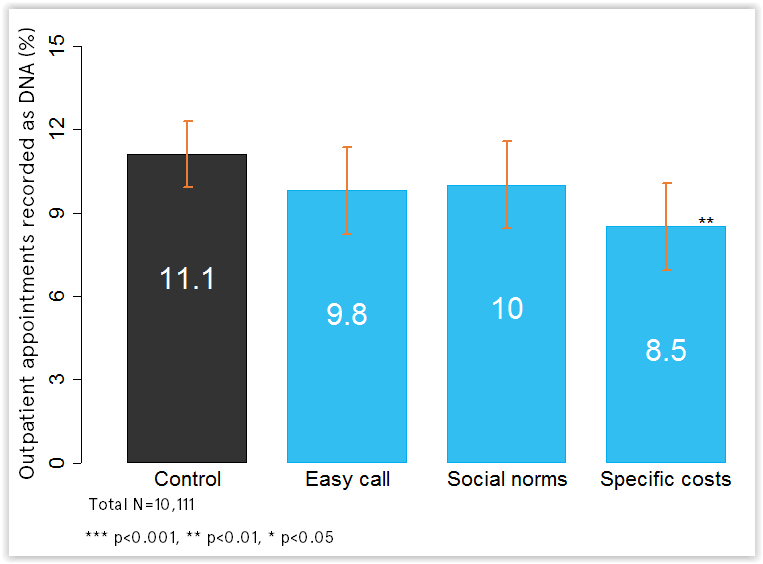 The ‘specific costs’ message informed the patient that their failure to attend their appointment would cost the NHS £160 – and it resulted in reducing the number of missed appointments by almost 25%.

As a result, the task team deduced that if this technique was used in every NHS Trust, there’d be 400,000 fewer missed appointments every year.

This evidence shows that the right message transmitted through the right medium can have a massive impact: reducing costs, empowering patients, and giving doctors and nurses more time to provide care.

We supply fast and secure business SMS services to healthcare organisations in the UK, Europe and Australia. Our easy-to-implement SMS API means it’s easy to get started, but what makes us really special is our problem-solving approach. If you’re looking for ways to save costs, offer an exceptional customer experience, and improve communication, it’s definitely worth giving our team a call. Read our white paper on SMS in healthcare.

I'm Liz Wilson, and I have the privilege of heading up the marketing team here at Esendex. I've seen marketing evolve from buying a list of email addresses and sending a cold message, to today's much more satisfying practice of delivering great content via multiple channels, and inviting people to engage with us on their terms. I hope you find our blog a valuable source of info and ideas; all feedback is welcome!

Say goodbye to SMS in NHSmail and hello to Esendex!

For many, the 31st of March 2015 will bring about the closure of the NHSmail SMS service. NHS England… read more

How healthcare providers can save costs by reducing missed appointments

Around 12 million GP appointments are missed in the UK every year at enormous expense to healthcare providers.… read more

Esendex signs up its 10,000th customer

Esendex has reached another important milestone – signing up its 10,000th customer. I-Rent are… read more