Topic: Esendex news
Esendex
With just a few days before the Esendex Last Minute Triathlon, Richard Stannard came in to give the team some last minute tips and coaching.
For most of the team it’s their first triathlon so Richard tooks us through the whole transition process (the change over from swim to bike and bike to run), the most technical part of triathlon; as well as a run and bike skills session.
At the level Richard races at, every second really counts and he had a bag full of tips, tricks and lessons born out of years spent looking for that edge over the best triathletes in the world as well as some of the most officious judges it would seem.
While each second probably won’t count as greatly for our team, his advice was invaluable, even to those of us who have competed a few times already. For those of us who are first-timers, it was a great opportunity to get a mental edge over the other novices and perhaps turn some of the pre-race nerves into a little bit of excitement.
Over and above the technical guidance, his biggest piece of advice was to ‘have fun’ and we certainly plan to do that.
Do we look ready? 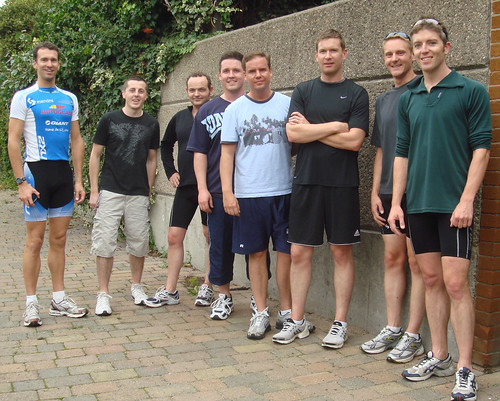 BTW Richard is the tall, athletic looking one on the left.
Share this:

The new version of Esendex’s Web SMS tool is due for Beta release early next year. This new version